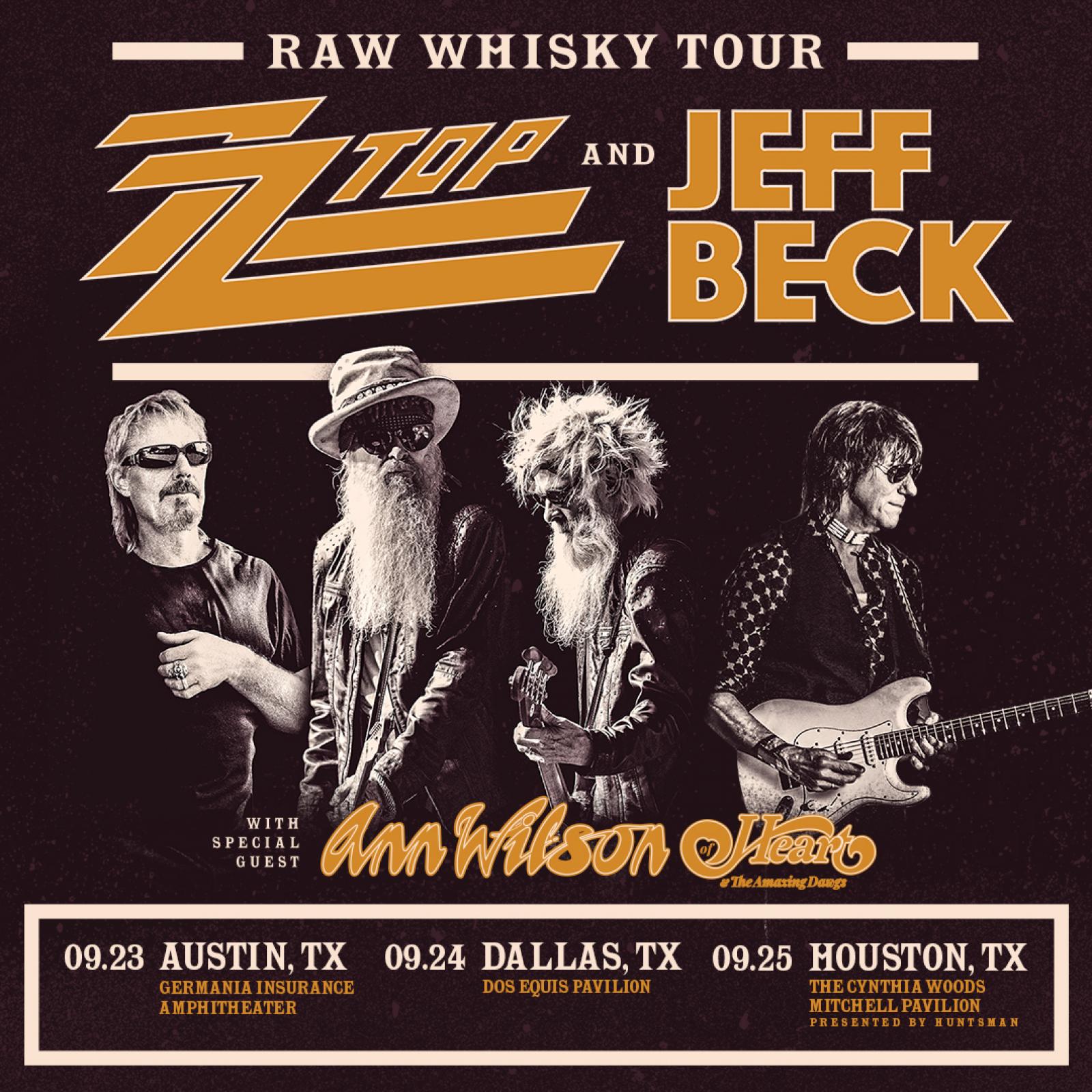 “That Little Ol’ Band From Texas” today announced three special Texas shows as part of their upcoming Raw Whisky Tour. ZZ Top’s return to The Lone Star State features special guests Jeff Beck and Ann Wilson and includes a stop at the Germania Insurance Amphitheater in Del Valle, TX, on September 23; Dos Equis Pavilion in Dallas, TX, on September 24; and the Cynthia Woods Mitchell Pavilion in Houston, TX, on September 25. Tickets will go on sale on Friday, June 24 at 10 a.m. at LiveNation.com.

ZZ Top continues to celebrate well over a half century delivering rock, blues and boogie on stage and studio to millions of devoted fans. With iconography as distinctive as their sound, ZZ TOP is globally recognized with their beards, hotrod cars, spinning guitars and that magic keychain, all of which transcend geography and language.

It was in 1969 Houston when ZZ TOP coalesced from the core of two rival bands, Billy Gibbons’ Moving Sidewalks and Frank Beard and Dusty Hill’s American Blues. ZZ Top's 1973 release, Tres Hombres, catapulted them to national attention with the hit “La Grange,” still one of the band’s signature pieces today.  Eliminator, their 1983 album was something of a paradigm shift for ZZ TOP. Their roots blues skew was intact and added to the mix came their hightech-age trappings that soon found a visual outlet with such tracks as “Sharp Dressed Man” and “Legs” on the nascent MTV. It was one of the record industry’s first albums to have been certified Diamond, far beyond Gold and Platinum, a reflection of sales exceeding 10 million units.

As a touring outfit, they’ve been without peer over the past five decades, having performed before millions of fans over four continents and have been the subject of their own Grammy-nominated documentary titled That Little Ol’ Band From Texas.  The band’s line-up of the bearded Gibbons and Hill and Beard, who ironically is clean shaven, remained intact for more than 50 years.  When Dusty temporarily departed the tour in the summer of 2021, Elwood Francis entered the picture accepting the directive from Dusty to be the perfect choice to stand in on the bass-guitar and now handles the low-end duties for the band for the present as well as into the future.

The elements that keep ZZ TOP fresh, enduring can be summed up in the three words of the band’s internal mantra: “Tone, Taste and Tenacity”. As genuine roots performers, they have few peers. Their influences are both the originators of the form – Muddy Waters, B.B. King, Jimmy Reed, et al – as well as the British blues rockers and Jimi Hendrix who emerged generations before ZZ’s ascendance.

They have sold hundreds of millions of records over the course of their career, have been officially designated as Heroes of The State of Texas, inducted into the Rock and Roll Hall of Fame (by Keith Richards, no less) and have been referenced in countless cartoons and sitcoms. They are true rock icons and, against all odds, they’re really just doing what they’ve always done. ZZ TOP abides!