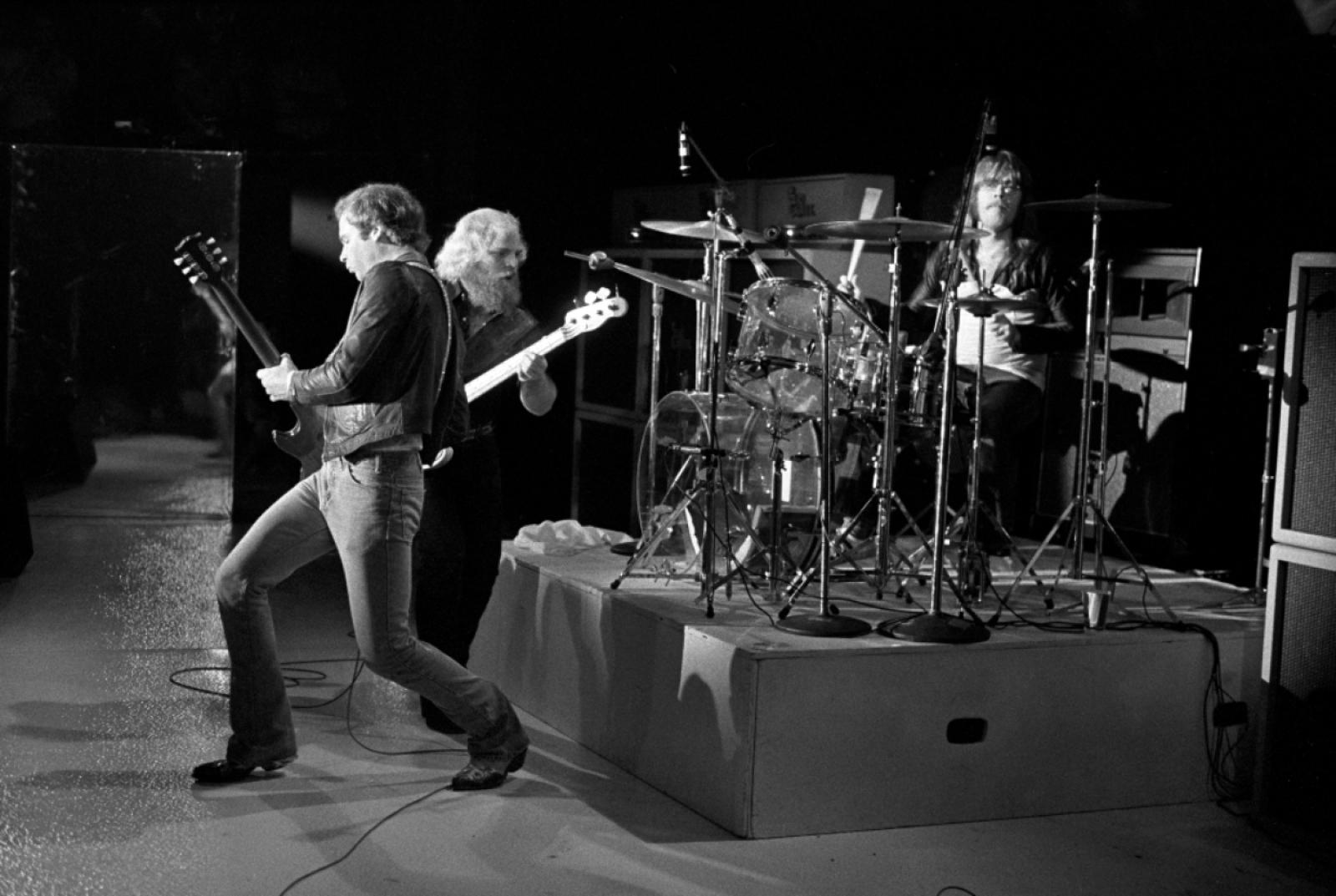 The Art of Kinda Fittin’ In: ZZ Top Begins

ZZ Top first rehearsed in January 1970, working out on a blues shuffle in C for three hours. The band played its first gig a month later, in Beaumont, Texas; recorded its first album later that year; and in January 1971, 50 years ago, released ZZ Top’s First Album.

About three-quarters of its aesthetic arrives at once on that record’s first track, “(Somebody Else Been) Shaking Your Tree.” It is a medium-tempo blues stomp fattened in the intro by a loud and polite steel guitar: The blues band is signaling you up front about its proximity to country music. Then you hear a young man’s effortfully croaked vocals, singing lyrics at a slight ironic distance to the jealous-lover tradition; a single-chorus guitar solo almost stoic in tone and precision; another chorus with no guitar or bass, just drums and shaker; and an abrupt ending with the steel and maracas: an aural illustration of the line “shakes your tree.”

The song has a great, low groove. It’s also kind of knowingly absurd; white blues-rock is absurd. Zoom out and you may see a tradition of people fascinated by an energy or a language they couldn’t claim as their birthright, using mad ambition and desire to live within it nevertheless; people fluent in the mechanics of privilege, creative and social mobility, street culture, rapid youth crazes, camp, public relations and humor; people who classicize vernacular art, spending long hours of rigorous study to make their gift seem as easy as leaning against a car and picking their teeth.

That entails a lot of baggage, but the sound of ZZ Top’s first album is cool and airy and steady; also simple, funky, dry as a bone, almost sedated. It’s not the hard-sell ’60s anymore. The marathon jamming of that first rehearsal has been radically sweated down and delimited; some new concision and straight-faced weirdness are going on here. The record jacket doesn’t look trippy, either. It’s the color of sand.

ZZ Top is still the same three musicians of First Album, most recognizable since the early ’80s, after two of them had grown their beards out fully: the singer and guitarist Billy Gibbons, the bassist Dusty Hill and the drummer Frank Beard. By the terms of Plutarch’s “ship of Theseus” question — can a boat that has had its parts replaced still be the same boat? — ZZ Top is the same boat, down to the core of its music. All that has changed are the band members’ body cells and their degree of access to the means of production.

I see that I’ve souped up my rhetoric here. I’m contouring to the subject. As the band’s de facto leader, Billy Gibbons is a sort of trickster librarian, related by study to T-Bone Walker and Lightnin’ Hopkins and by job description to Jeff Beck and Keith Richards. By spirit-essence, however, he’s closer to Andy Warhol and Houston DJs like Skipper Lee Frazier and Russell Lee Moore, “The Weird Beard.” Prospector and cool-hunter, he carries forward the lessons of American applied-art geniuses, hype talkers and inventors of slang mystery. He’s been an outsider-insider from the start: He heard his first blues singers in the clubs of Houston’s Fourth Ward, escorted by the daughter of his Black housekeeper, Stella Matthews. There, as he wrote in his illustrated memoir, Billy F Gibbons: Rock + Roll Gearhead, he “learned the art of kinda fittin’ in.”

As calm and grounded as Gibbons’ guitar technique may be, his conception of the blues grew into a game of cartooned signifiers: all things Texas and Mexico; food, cars, desert, Barbie-shaped women, sex, beer. As close as he gets to the thing, he’s still painting a sign for the thing. He loves the color and dimensions and specs of the sign, and its aura of officialness; he’s signing “certified blues,” as he puts it in a song of that name on the first album. But the quotation marks stay on. It’s not the thing, and he knows it. This is why ZZ Top, in its meta-ness, remains simpler and (I will say in a quiet voice) better than any other blues-rock band. It simply knows its lane.

Getting closer to what ZZ Top’s First Album is might involve some consideration of what it is not, or what it distinguished itself from. There had briefly been an earlier incarnation of ZZ Top, a trio with Gibbons, Lanier Greig on Hammond organ (replaced by bassist Billy Ethridge prior to Hill) and Dan Mitchell on drums. It made one single in 1969: “Salt Lick,” backed with “Miller’s Farm,” sufficiently grandiose, gothic and trendy for its time, possibly the most uncool music Gibbons ever made. Before that, Gibbons had played for a few years in the Moving Sidewalks, a slightly younger and slightly more technique-savvy answer to the 13th Floor Elevators in the brief moment of Texas psychedelia. The Sidewalks were about the new — they played for stoned student dancers and made some chic experiments with tape manipulation — but in songs like “Joe Blues” they were also using Gibbons’ stored knowledge of the old.

ZZ Top’s First Album was produced by Bill Ham, who also managed the band from 1969 to 2006. If part of this group’s power is its ability to be recognized, Ham’s influence may have been central. His strategy for decades was to keep its members from being publicly documented playing with other people. Later ZZ Top, more stylized, more streamlined and overdriven, may have ended up belonging to the world — or MTV, or Las Vegas — yet it more or less remained the ship, a closed and finite system.

In 1970, it was a regional band. Gibbons has written that the group’s circuit for the first few years was often package tours with other Texas musicians like Doug Sahm, Roy Head, Jesse Lankford and C.L. Weldon. (If you look up Lankford and Weldon’s early ’70s record Houston’s Natural Gass, you’ll hear a rhythm section that sounds a bit like Top’s.) And once in a while the first album makes missteps toward homeliness. “Old Man” is slow and plaintive Southern rock, a sound better explored by Lynyrd Skynyrd and the Allman Brothers Band.

You can imagine what Gibbons, an ambitious listener, may have been paying attention to beyond his Texas heroes like Walker and Hopkins. Maybe Peter Green’s playing in “Rattlesnake Shake,” from Fleetwood Mac’s Then Play On; maybe Jeff Beck on “Rock My Plimsoul,” from Truth, and Jimmy Page, from all over Led Zeppelin II. (In the second chorus of the “Certified Blues” solo, you can hear Gibbons help himself to the three-note lick that ends Page’s second solo in “Heartbreaker.”) “Just Got Back From Baby’s” contains his best and most flexible guitar solo on the album, moving forward on repetition and lovely dynamics, mumbling and weeping with humility, but never going full daredevil like those other guitarists do. It’s kinda fittin’ in.

I had lunch with Gibbons once, about 10 years ago. He came to the restaurant in show-clothes and his curiosity never dimmed. I mentioned Doug Sahm, and he started singing the middle eight of Sahm’s version of “I’m Glad for Your Sake (But I’m Sorry for Mine).” He talked for a while about Paul Oliver, the British architectural historian and author of The Story of the Blues — another white man fascinated with the blues and vernacular design. In my iPod I’d brought a recording of Ali Farka Touré, the Malian singer and guitar player. Gibbons was cognizant, of course. This was something he hadn’t heard, a raw live recording released on cassette in 1984 and reissued as Ni Foli; it comes by its electric-guitar distortion and its cyclical riffs through a very different route than Gibbons did. He put on the headphones, listened for a minute and then pulled his head up. “Bin?” he said. “This is the music ah’ve been looking for all mah lahf.”