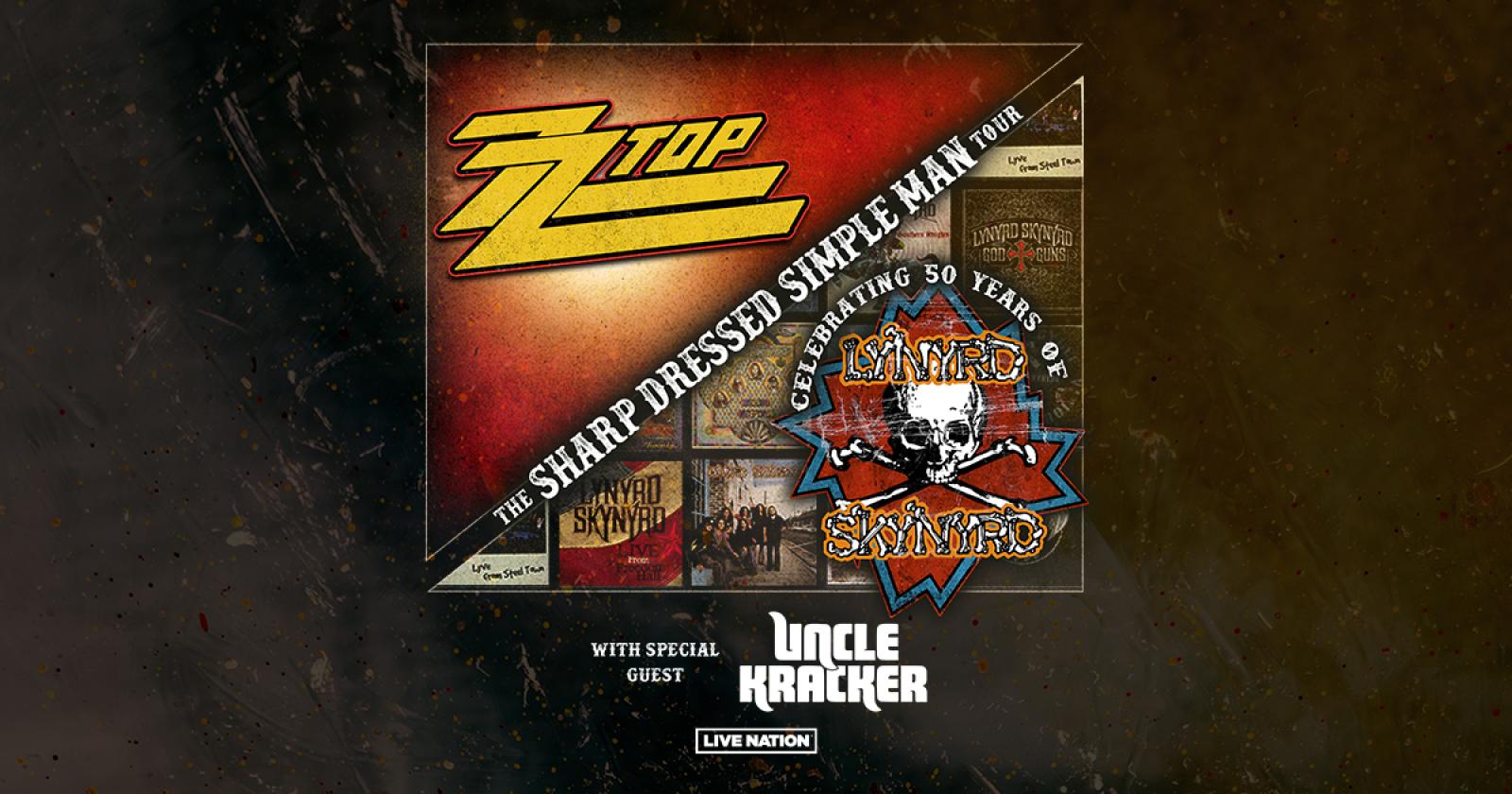 Today, the titans of American classic rock ZZ Top and Lynyrd Skynyrd have announced their first co-headlining tour – The Sharp Dressed Simple Man Tour – taking over twenty-two cities in North America this summer. Produced by Live Nation, the tour kicks off on Friday, July 21 at iTHINK Financial Amphitheatre in West Palm Beach, FL, and continues with stops in Fort Worth, Phoenix, Chicago, and more before wrapping up in Camden, NJ at Freedom Mortgage Pavilion on Sunday, September 17.

*Not A Live Nation Date

As Lynyrd Skynyrd approaches the 50th anniversary of the band’s critically acclaimed debut album ‘Pronounced 'Lĕh-'nérd 'Skin-'nérd’ in 2023, they resonate as deeply with their multi-generational fan base today as when they first emerged out of Jacksonville, Florida in 1973. Few ensembles have had the deep impact in creating a lifestyle as Skynyrd has. The band travels forward with a primary mission of celebrating a legacy that honors all whom have had a resonating contribution to the lives of hundreds of millions of fans globally. Former members Ronnie Van Zant, Allen Collins, Steve Gaines, Ed King, Billy Powell, Bob Burns, Leon Wilkeson and Hughie Thomasson alongside others will forever remain significant contributors to this indelible repertoire and the band’s colorful history. Today, Lynyrd Skynyrd rocks on with a current line-up featuring Johnny Van Zant, Rickey Medlocke, Mark “Sparky” Matejka, Michael Cartellone, Keith Christopher, Peter Keys, Carol Chase and Stacy Michelle. Gary Rossington continues to have a significant presence and creative influence with the band, while making select appearances on the road.

The rock and roll powerhouse continually tours, and as Van Zant shares, “It’s about the legacy of Lynyrd Skynyrd, and what it stands for, what the fans are all about. There’s nothing like getting out there playing a great show with Skynyrd and seeing people love this music.”  Adds Rossington, “We’re still standing, Still keeping the music going. We wanted to do the guys who aren’t with us any more proud, and keep the name proud, too.”

With a catalog of over 60 albums, billions of streams, and tens of millions of records sold,  Rock & Roll Hall of Famers Lynyrd Skynyrd remain a cultural icon that appeal to all generations.

“That Little Ol’ Band From Texas” has been at it for well over a half century delivering rock, blues and boogie on stage and studio to millions of devoted fans. With iconography as distinctive as their sound, ZZ TOP is globally recognized with their beards, hotrod cars, spinning guitars and that magic keychain, all of which transcend geography and language.

It was in 1969 Houston when ZZ TOP coalesced from the core of two rival bands, Billy Gibbons’ Moving Sidewalks and Frank Beard and Dusty Hill’s American Blues. ZZ Top's 1973 release, Tres Hombres, catapulted them to national attention with the hit “La Grange,” still one of the band’s signature pieces today.  Eliminator, their 1983 album was something of a paradigm shift for ZZ TOP. Their roots blues skew was intact and added to the mix came their hightech-age trappings that soon found a visual outlet with such tracks as “Sharp Dressed Man” and “Legs” on the nascent MTV. It was one of the record industry’s first albums to have been certified Diamond, far beyond Gold and Platinum, a reflection of sales exceeding 10 million units.

As a touring outfit, they’ve been without peer over the past five decades, having performed before millions of fans over four continents and have been the subject of their own Grammy-nominated documentary titled That Little Ol’ Band From Texas.  The band’s line-up of the bearded Gibbons and Hill and Beard, who ironically is clean shaven, remained intact for more than 50 years.  When Dusty temporarily departed the tour in the summer of 2021, Elwood Francis entered the picture accepting the directive from Dusty to be the perfect choice to stand in on the bass-guitar and now handles the low-end duties for the band for the present as well as into the future.

The elements that keep ZZ TOP fresh, enduring can be summed up in the three words of the band’s internal mantra: “Tone, Taste and Tenacity”. As genuine roots performers, they have few peers. Their influences are both the originators of the form – Muddy Waters, B.B. King, Jimmy Reed, et al – as well as the British blues rockers and Jimi Hendrix who emerged generations before ZZ’s ascendance.

They have sold hundreds of millions of records over the course of their career, have been officially designated as Heroes of The State of Texas, inducted into the Rock and Roll Hall of Fame (by Keith Richards, no less) and have been referenced in countless cartoons and sitcoms. They are true rock icons and, against all odds, they’re really just doing what they’ve always done. ZZ TOP abides!